Astral chain is a 2019 action-based approx 19 hours long-play game. This walkthrough guide of the astral chain will go through all 12 files of the game and will be detailing all collectibles, locations, and strategies, and all boss enemies.

Complete walkthrough of Astral complete guide will cover all 19 hours of guide in this post, So nothing to worry about the game just sit back and enjoy the whole walkthrough. 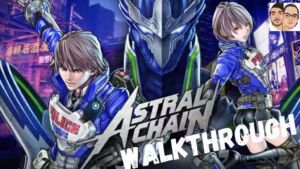 How to get an S+ rank in the Astral chain?

Getting an S+ rank in Astral Chain is not too tough, Just you will need to go Through some correct guides and tips and tricks and the right walkthrough

you’ll need to hear out the pre-mission guidance so that you know what to do and how to do things as max mission completion endpoints you got in Astral Chain more it will help in push your rank up.

Do not stuck at one legion remember to use a variety of legions.

Full fill The use of sync and cool down attacks.

Use as much skill you have and try all of them each of your actions during the game direct affect your rank.

This walkthrough guide in the astral chain will make your rank push to S+. Try out this guide
{tocify} $title={Astral Chain Walkthrough Complete guide}

The Astral Chain starts with the characters selection in File 1. Game starting initial cut scene came across the screen and thereafter you would have a choice to choose the gender and to customize your character as you want.
After the character selection and customization, the game begins.

as the name suggests at the starting of the game your character is shown in the hot pursuit of high-speed bike chase sequence controls and guidance will be given throughout this scene. how to move and fire while on a motorcycle.
while moving with the guidance you had to shoot down your enemies and as the scene ends the result will be shown on the screen and to increase XP you had to save few lives by helping them to the stretcher.

This part of the game goes through the player with its shooting controls and enemies. Just FIre evade and move and lock on the enemies that are all you had to do
Get upgrades to fight enemies and use new weapons and this full scene will make you too much happy.

From here the Astral Chains seems to be interesting as you will first get a fight with a Boss Enemy. But do not worry you will easily defeat Laius as the Boss is not too much strong but still fast than the others so be alert.
It’s too easy to defeat Laius just fought against him and try to get evade high damage when the mission is going to end then the boss will start throwing cars at you so remember to evade them to push your rank. After the ending of the scene, there would be a cut scene and File 1 of the Astral Chain game ends.
Check out the video if still having doubts about covering Astral chain File 1 walkthrough

Astral Chain File 2 Awake Walkthrough Has better missions and great training experience with zin.
At the starting of File 2, two cutscenes came one after the other, and at the starting, you’ll be shown how to use the map and open it and key mapping other guides get across that.

Here zin will train you to be the fighter. The training menu will pop up during the training where you would be able to choose which training sequence you want to learn. Remember that During missions you can’t switch between training areas.
So try out the whole training if you want this would really improve your future gameplay and would help in pushing up your rank to S+

After the training when arriving in the city you had to search for clues and find out chimera. IRIS would help in finding the clues.
After 100 percent progress MAX will ask you a couple of questions

Out of the Gate

here max will instruct you to follow the chimera’s trail. The path goes out of the garbage after this is all had completed you will be going to fight against another Boss Briareos.

During the fought against Briareos you can use your legion to tie up the boss to get some time and reduce the health of the boss remember the chain would be temporary.
After you defeat Briareos you had to follow the path and maybe had to fight against few small enemies in the path before you came across another boss.

Follow down the stairs and you will be thrown into the new session. Use your best skills and stealth to defeat Enceladus. Chain Counter might work best in this situation.
after this fight, entertainment is not over just had started.

The scene starts with a fight between small enemies and thereafter a small cutscene will occur and then thereafter the big fight starts take out your legion and start fighting.
it would be a little harder to fight but would be too interesting.
Check out the video if still having doubts about covering Astral chain File 2 walkthrough 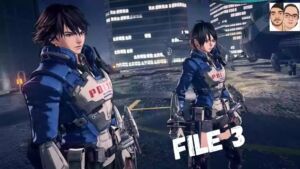 Astral Chain File 3 has great upgrades and will me came across new characters too.
Astral Chain has a depth look in a police HQ

Visit Each Facility in HQ chain

You had to go across all Six rooms
Check out all these rooms and upgrade weapons and etc that each room offers.

Question the locals in the green area of the map investigate it all.
Here are the few to whom you had to interact with
again after 100 percent progress, Akira would ask a few questions whose answers are as follows

before chimera takedown the game show you about sync attacks now you had to fight with enemies with sync attacks. When in doubt wrap the chimera up with the chain defeat this enemy and thereafter another enemy, Ker came out

Ker is an enemy full of tricks and remembers you can’t attack the enemy until you cut down the chain between Ker and the Cinema.
Defeat Ker

Diomedes is a great enemy and has a great fight scene between them after you won the fight it’s a celebration time.

Now you had to fight two more chimeras but here you would get help from your siblings too. thus it would be easy to win the fight.

The last and the final scene or mission in the File 3 of Astral chain is with Arrow Nemesis fight would be typical and be the last mission in this file.
Check out the video if still having doubts about covering Astral chain File 3 walkthrough

File 4 in Astral Chain starts with normal police HQ and in this mission, you had to find out the women in the back too. To do so you had to investigate and find out few clues.
The walkthrough is too easy o perform which needs no exploring as you had learned to fight and to win
in Aello after the cutscene, you had to answer a couple of questions
Arm Nemesis Boss Fight
Chimera Takedown
Mall Cleanup
Azure Pazza
Homunculus alpha
Check out the video if still having doubts about covering Astral chain File 4 walkthrough

File 5 Asral Chain starts from Police HQ where you are sitting next to olive where you will get a visit from Brenda who will you the rundown  and the story go on
Out From The Smoke
Zeus
Backup PLan
Deimos Boss Fight
Ground Zero
Beast Nemesis Boss Fight
Odd Drone
An old-new Threat
File 5 ends with these hints.
Check out the video if still having doubts about covering Astral chain File 5 walkthrough

After the mission of last file 6 in the astral chain, you will be locked in the cell it would be no longer after you get out of there just go through the key points of the paths discussed below to complete the walkthrough with S+ rank
This is the last fight you had in this file which is against the gamma evolution of Hommculus.
Check out the video if still having doubts about covering Astral chain File 7 walkthrough

After the ending of the last mission file just go to the top of the roof and met Akira tell him that you are ready for the mission and the mission starts from there just get few fights with enemies and there you are to follow a few key paths and points to figure out the best walkthrough
The starting and ending with a boss fight are too entertaining:
That’s all in this file to justify but there is so much to play in it
Check out the video if still having doubts about covering Astral chain File 8 walkthrough

At the starting of File 10 in the astral chain talk with Hai and Olive and head to the waypoint and explore the area.
Talk with Cat Lover and she will give a case ” Lost Cat Search”
Defeating Akira Legion Fusion Boss will lead to the end of the mission and file 10 in Astral Chain
Check out the video if still having doubts about covering Astral chain File 10 walkthrough

As the game is gone too far away to the end so the most dangerous missions with the overpowered Boss fights await now so get ready with the highest upgrades of your weapon and practice out your powers after you had done this all go to Hai and tell him that you are ready for the mission
The first path starts with the mystery capsules
After these, all great fights end the game seems to end as credits are shown on the screen but there is still the last file of the game left File 12 in Astral Chain
Check out the video if still having doubts about covering Astral chain File 11 walkthrough

This File contains the game epilogue and it requires you to pass a series of combat cases to see the rest of the game to do so
Head back to the commander center and talk to olive to view them or you can revisit these files by visiting the pc in the command center.
After this all the Astral Chain ends with nothing left behind if still think you had left some interesting which I had discussed but skipped the part during pay then start again and enjoy it.
Check out the video if still having doubts about covering Astral chain File 12 walkthrough
Share the complete walkthrough Guide to rank S+ with your Astral Chain buddies